Life in the almshouses

The almshouses of the Jesus Hospital in Guisborough are one of the region’s most interesting and least well-known vanished institutions.

Founded in 1561 by Robert Pursglove, the hospital had the dual function of educating the young and caring for the old – two groups which were given no special protection by the state. While the school still exists today in the form of Prior Pursglove College, the almshouses were demolished over 120 years ago. They have left no ruins, unlike the town’s famous priory, and a visitor to Guisborough would be unlikely to guess that they once existed. 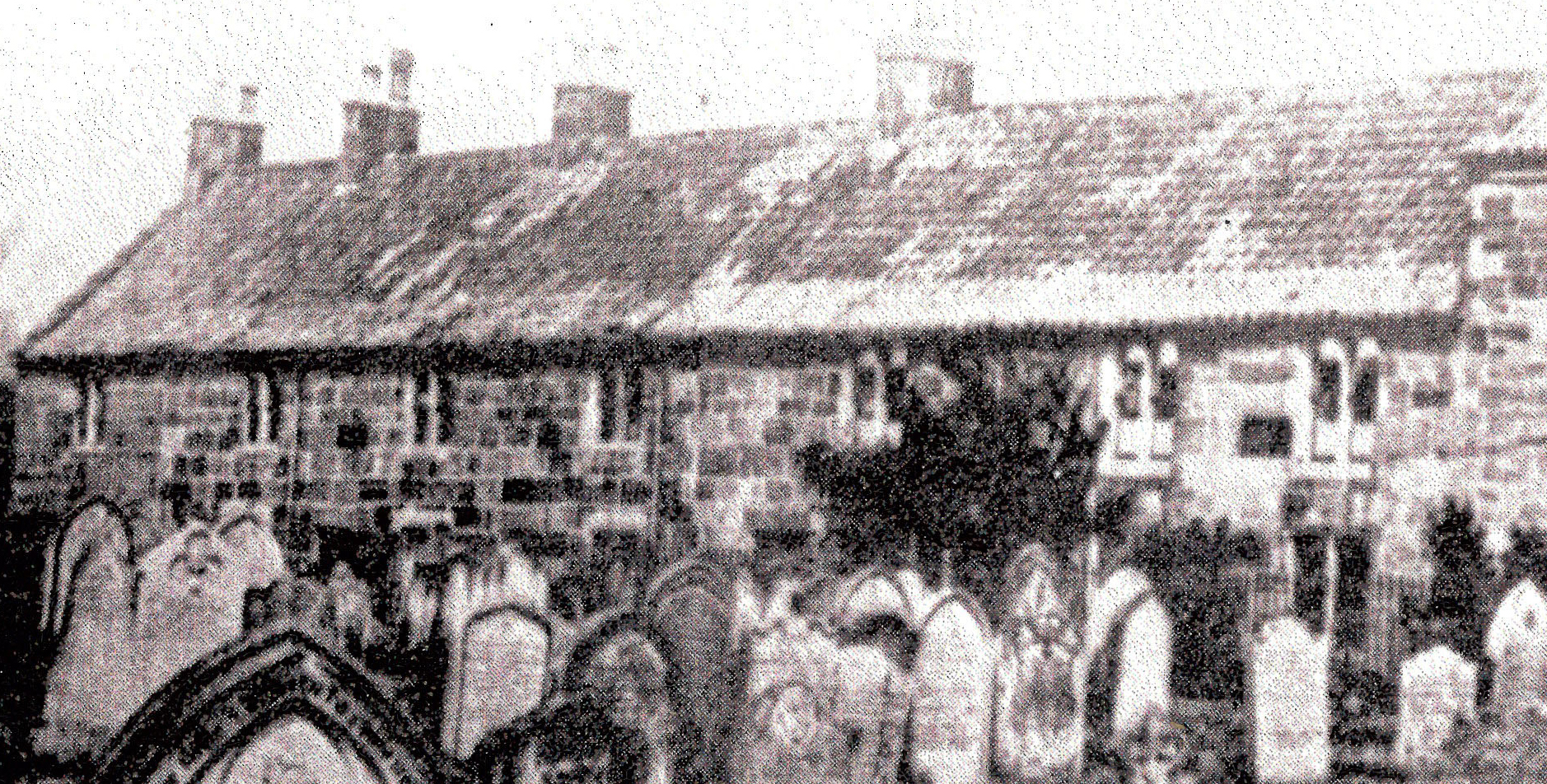 And yet, for over three hundred years, the almshouses provided a safe haven for hundreds of destitute elderly men and women. Places were in high demand, and vacancies attracted a slew of applications.

So, what was it about the almshouses that made them so attractive? How were they run? And what was life like for the people who lived there? This article will go some way to answering these questions and more, and aims to provide an interesting introduction to a fascinating and very important place.

I say ‘meant to be’ because life under the various different Wardens might not have been exactly as Robert Pursglove intended, and although the archive has a great deal of information about the almshouses, we do not have documents written by the pensioners themselves while they were in residence here. Because of this, we have to look carefully through archive sources to gather evidence about what life was really like for the poor people who applied for and won a place at the Jesus Hospital.

The hospital was run by two annually elected Wardens, and one full time employed Schoolmaster. The Wardens were not paid a salary, but they were given expenses, and they had control over who received contracts for maintaining the building and supplying the foundation with equipment. Hence, being a Warden could be a very lucrative and worthwhile post. They also had the task of deciding which of Cleveland’s poor would take residence at the hospital.

The Wardens made their choice according to strict criteria listed in the Statutes.

Pensioners had to be over sixty years of age, be resident in Cleveland, and to have lived there for at least three years. Residents of the parish of Guisborough were given priority, and pensioners were to be selected according to their need. Married persons and those with any income were not allowed to be admitted, no matter how small the income. If a pensioner did marry while they were in residence, they would lose their place immediately.

While the Wardens appointed the pensioners and looked after the finances, the Schoolmaster also had an important role to play. He managed the day-to-day behaviour of the pensioners.

I mention behaviour, but not care. Pursglove clearly did not expect the Wardens or the

Schoolmaster to care for the pensioners. Instead, the almsfolk had responsibility for one another. As Robert Pursglove wrote in the Statutes:

‘And every one of them shall help each other in time of their sickness or impotence [physical disability], and especially the six poor women to be diligent in so doing.’

That is not to say there was no extra care available: there was. The evidence comes from the hospital’s annual accounts. In 1621, for example, the Wardens paid out four shillings and two pence ‘Given to the poore, above their wages, in sicknes’, and in 1623 they paid out six shillings and six pence ‘Given unto the poore at sundrie tymes in sicknes & neede’. It is likely this money was used to pay for medicine, a nurse to help care for them, and possibly even a doctor.

Later on, the archive’s collection of receipts and tradesmen’s bills reveals that nurses were employed on a temporary basis as and when they were needed. For example in 1768, when Winifred Stonehouse was paid ten shillings and sixpence for five weeks washing and attending to George Collier.

The life expectancy of pensioners once admitted could be anything from a few months to several years. When a pensioner passed away, it seems as though that is where the hospital’s duties ended. It is not surprising that death was a part of almshouse life; the point of the almshouses was to shelter, feed and clothe the elderly poor until they died. The hospital did not, however, regularly fund their funerals.

There are two exceptions to this in the accounts from 1574 to 1674. In 1629, the Wardens and Master pay out two shillings and two pence for ‘a sheet and burying of John Sowreby’, and in 1649 they pay for ‘a wyndeinge sheet & other charges at William Young[’s] buriall’. The winding sheets mentioned are burial shrouds, and it was highly unlikely these men would have had coffins.

In general, funerals were paid for by the families of the deceased, or by the local overseers of the poor (O’Sullivan, p. 53). It must have been rare circumstances indeed that led to the hospital paying for the winding cloths and burials of John Sowerby and William Young.

Unlike the procedures after death, everyday life was meant to be a community effort. As well as looking after each other, the almsfolk had other duties. Pursglove writes:

‘And the said poor people shall sweep the school-house at such times and in such order and course as the master of the scholars shall assign and command them’.

They were also expected to pray at the nearby St Nicholas’ Church (above right) ‘two hours at least every day, one hour before noon, and another hour at afternoon’.

From at least the eighteenth century, they had their own pew in St Nicholas’ church, and the Schoolmaster had a place in the pew behind, presumably to watch over them (see Dan O’Sullivan, Robert Pursglove and his Hospital, p. 56).

Although it is not recorded in the Statutes, the pensioners also had kitchen gardens, called the almshouse garths. The account book mentions them in 1618 when a wall was built around them. There appears to have been a garden for the women and one for the men, which they were expected to tend.

In addition to that, they were expected to behave, according to the standards of the day. If any of them were to become what Robert Pursglove calls ‘scolders, thieves, brawlers, or do use any notable vice’ the Wardens and Master were instructed to give them three ‘monitions’ or warnings. If these three warnings didn’t work, the Wardens had to ‘put them forth of the said almshouse for ever.’ We have evidence of this three warnings system still in use in the nineteenth century.

If we compare these details of the pensioners’ lives to Robert Pursglove’s own life as a novice, a monk, and then an Augustinian canon and Prior, we can perhaps see some parallels. Pursglove seems to have wanted the almsfolk to live an ascetic, quiet and contemplative life, spending a good portion of their day in prayer. A good life – morally, spiritually, and physically. But what did the pensioners get in return for their prayers, good behaviour and physical labour?

Compared with other poor elderly of the time, they got a lot. They had a room, which they shared with one other person. There were locks on the doors, implying security and a certain measure of privacy. They were given clothes, a weekly stipend – which Robert Pursglove called their ‘weekly relief’ – to cover their food and living costs, and a collective pot of forty shillings a year for the repair of their bedding, clothes and other items. The Wardens and Master oversaw the spending of this forty shillings, but their weekly stipend – initially a shilling a week – was spent by the pensioners themselves. The almshouse pensioners had a level of personal freedom and independence that inmates of workhouses and poorhouses seldom enjoyed.

The pensioners were also given hen money, collected from hen rents. When Robert Pursglove founded the hospital in 1561 he endowed it with lands in North Yorkshire and County Durham, and these lands were leased out to pay for the hospital. Some of the leases have a hen or two listed in addition to a cost in shillings and pence, and sometimes even half a hen is specified. This part of the rent was not actually paid in hens, as Dan O’Sullivan explains, it was a method of payment left over from medieval rentals, and was paid in money by the sixteenth century (O’Sullivan, p. 63).

We do not know what the pensioners spent their hen money on, but we do know that, in the early seventeenth century, it was an annual total of six shillings and eight pence, rising to seven shillings around 1663. This is not a large amount of money to divide among twelve pensioners, and was likely given to them as a seasonal one-off payment. In the 1670s, the payment is called ‘hen money at Christmas’, and would have been a little like a Christmas bonus.

It can be difficult to get a clear picture of what life was like for the pensioners. As I mentioned at the beginning of this article, we have no records about almshouse life written by their own hands and in their own words.

What we can tell is that almshouse life was very attractive. In an age when poor people could not retire and there was no state pension, illness and disability could mean homelessness and starvation. The almshouses were a haven; successful petitioners could be guaranteed a roof over their heads, money to live on, clothing and companionship for the rest of their lives.

We know from a rare record of school life in the 1860s that the almsfolk came into the school room every morning to pray with the Master and the school children. It isn’t clear when this began, but if the Statutes were followed to the letter, services and quiet prayer in church would have given a routine to the pensioners’ days. Along with sweeping the school house floor, tending the gardens, and buying and preparing their own food, the pensioners’ days were probably gently paced but far from empty.

The almsfolk were expected to stay in the almshouses at night, and it counted as poor behaviour if they stayed out drinking too long or drank too much. They could, however, visit family or friends elsewhere for a total of up to thirty days a year, and longer with the permission of the Wardens.

Unlike in poorhouses and workhouses of the eighteenth and nineteenth centuries, the pensioners were not expected to work. In workhouses and poorhouses, the poor were generally put to work for the profit of the managers. At the almshouses, the Wardens were not allowed to make a profit, and any donations of food, money or equipment were to be given to the poor or used for their benefit.

It wasn’t always ideal, as our collection of nineteenth-century letters shows. Pensioners brought their own beds and bedding, making it very difficult to control pests. In the 1840s, this led to an infestation of bed bugs so bad that several of the beds had to be removed. There were also issues that sprang from a lack of understanding about mental illnesses, dementia and other diseases, addictions such as alcoholism, and behavioural problems.  But even with these problems, the almshouses attracted many letters of petition.

All this ended in the 1880s. Sir Joseph Pease led the reconstitution of the free grammar school, and founded Guisborough Grammar School with the capital and resources of the Jesus Hospital. The pensioners were out-pensioned and the amount devoted to them sharply decreased, but payments continued for a surprisingly long time with coal money still being paid out into the 1970s.

Although the almshouses were closed and the buildings demolished, the archive survives as testimony to the legacy of Robert Pursglove’s philanthropy, and gives us an insight into the lives of the men and women who lived worked and died at the hospital he founded.