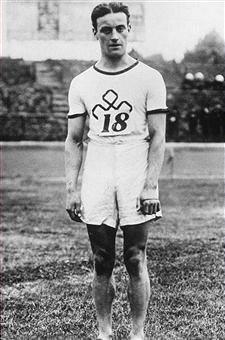 Whilst Willie Applegarth did not attend the Grammar School, as a Guisborough lad who became the fastest man on earth and was described in 1914 as Britain’s most famous athlete, he is someone of whom we can be justifiably proud.   William Reuben Applegarth was born in Union Street, Guisborough in 1890 and in 1910 set a new British Athletics Record for the 100 yard sprint.  He later became a triple world record holder and the first man to hold both the 100m and 200m record at the same time. His world record of 9.6 seconds in the 100m stood for over 40 years until 1958.

In 1912, Stockholm hosted the 5th Games of the modern Olympiad which had started in 1896. For the first time at Stockholm, 2,408 competitors, including 48 women, came from all 5 continents with 28 nations taking part in 102 events across 14 sports.

Willie represented Great Britain at the Stockholm Olympics and along with Victor D’Arcy, David Jacobs and Henry Macintosh, was a member of the British 4x100m Relay Team that won the Gold Medal on July 9th.  A British Gold Medal win in this Athletics relay event was not to be repeated until the Athens Olympics of 2004.

He was nationally recognised as a role model for young people and in an article published in 1914, he gave his philosophy as “Live healthily in all ways, train carefully, go to your mark full of courage, finish ‘all out’ and whatever the result, you will have done everything that you can”.

Willie was ahead of his time in his training and preparation methods and was a student of the famous athletics coach Sam Mussabini and Harold Abrahams, later immortalised in the film ‘Chariots of Fire’, is known to have said that he had taken Willie as his inspiration. Whilst Harold Abrahams won the gold medal in the 100m at the Paris Olympics of 1924, he did not succeed in breaking Willie’s world record time.

Willie and his family moved from Guisborough to London and later, in 1922, Willie emigrated to America where he died in Schenactady, New York in 1958.

In 2012, in the year of the London Olympics and the centenary of Willie Applegarth’s Gold Medal winning triumph, the College was proud to welcome two of Willie’s great nephews to the opening of “The Applegarth Centre”, the College’s new Art and Media centre.