In February 1919, at a meeting of the Governors of Guisborough Grammar School and Hospital, the Governors unanimously approved the Headmaster’s proposals for a War Memorial at the School. 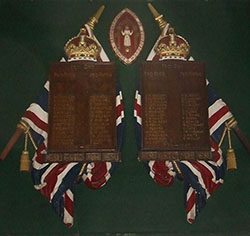 In November 1919, Mr Allison, School Governor, proposed that a Memorial Clock be erected in place of the Bell Turret. The proposal was seconded by Mr Cowen and carried unanimously. One Old Boy wrote that ‘when the boys are returning from their games, they will look up to the Memorial and

remember the greater Game and the greater sacrifice’. The Clock was completed in 1922. In 2011, on the College’s 450th anniversary, the clock’s mechanism was replaced with an electric motor and the whole refurbished through a very kind donation from the Foundation Governors.

A third reminder of World War I is a plaster statue of St Joseph and the infant Jesus. Reverend Berwick, Headmaster, had spent the first 3 months of 1917 serving as a YMCA Chaplain at the Front in France. Reverend Berwick found the Statue in the ruins of the village of Fleurbaix. It had stood in the village school “unmoved and unbroken through much shelling”. He brought the Statue to the School saying “I hope it will remain in the School as an object lesson of the Great War to many generations of boys”.