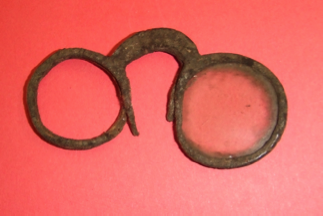 These rare sixteenth-century leather spectacles were found 130 years ago under the foundation stone of the old almshouses.

Prior Pursglove College Archive is incredibly fortunate to possess a rare pair of early leather spectacles.

Spectacles were invented in Italy in the fourteenth century, and their use quickly spread throughout medieval Europe. The pair in the College’s collection is thought to date from the sixteenth century.

They were discovered in the 1880s, when the old almshouses and school were being torn down to make way for the new school designed by Alfred Waterhouse. John Cook, the Clerk of the Works, offered his labourers beer if they found anything interesting under the foundation stone.

Not only did they find the glasses with one lens, but after careful work they found the other lens as well. Sadly, the second lens has since been lost.

The glasses are in a remarkable state of preservation, considering they’re made of leather – a perishable material – and. especially considering a stone building was constructed on top of them.

We don’t know exactly when the glasses were made. We can make an educated guess from their shape, which is typical of the sixteenth century. Indeed, they are almost identical to a haul of dozens of leather-framed spectacles dating to the late sixteenth century which were found by archaeologists investigating an old shipwreck off the coast of Croatia.  However, leather glasses of this type were made as early as the fifteenth century. Could they have belonged to a monk at the Priory?

While we have a good idea how old they are, we can only speculate on how they ended up underneath the foundation stone. Perhaps their owner came to look at the foundations when they were being dug, and leaned too far forward. Or perhaps they were lost a long while before, or just plain thrown away.

This is something we’ll never know for sure, but the glasses remain a treasure in our collection, and a wonderful link to our past.