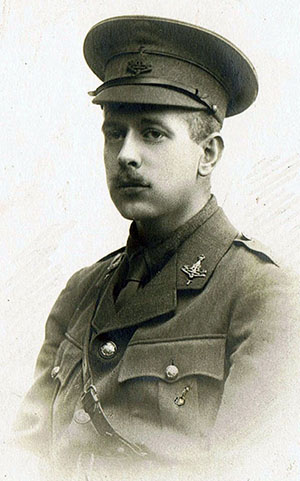 Bernard Charlton was born in 1885 and joined the School in September 1895. He was a keen sportsman and was Vice Captain of the School XI in 1899.

Bernard left Guisborough Grammar School in March 1900 and in 1911 he became Manager of Guisborough Ironstone Mine. By 1914 he had taken charge of the Collieries at Hedleyhope, near Tow Law.

He was a keen Territorial and in 1913 presented a miniature rifle to the School. When War was declared, Bernard was a Company Commander and, together with his battalion from the Yorkshire Regiment, he volunteered for service abroad. He was sent to the Front in April 1915 and was badly gassed at the 2nd Battle of Ypres and spent 5 months out of action.

He was appointed Adjutant in October 1915 and was awarded the Military Cross in January 1916 for exemplary gallantry. He was Mentioned in Despatches twice and was promoted to Lieutenant Colonel on 27 December 1917.

He was killed on 22 March 1918, having gone up, in the midst of thick fighting, to rally his men and is buried at Roisel, France.

Lt Colonel Charlton’s medals, including his Military Cross, can be seen at the Green Howards Museum in Richmond together the with wooden cross that originally marked his grave. This original cross was damaged and later replaced with a second wooden cross and this second marker can be seen in St Nicholas' Church, Guisborough.

The portrait above is reproduced with the kind permission of the The Green Howards Museum. www.greenhowards.org.uk