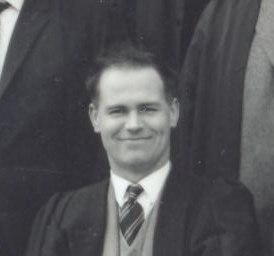 Bill Thompson taught at both the Grammar School and the College from 1957 until his retirement in 1992. More recently, Bill’s help has been invaluable in developing and recording the history of the School and its archives.

Here, in his own words, Bill reminisces about his career.

“It was a beautifully sunny May day as I walked along the Applegarth, to my right the great east end of the ruined Priory, to my left Waterhouse’s nineteenth century rebuilt Grammar School – a clever mix of Cumberland slate, local stone, terra cotta and warm brick.

Mr Routh, the first Headmaster since the foundation of the School to not be a Clergyman, and I talked in his lounge about schools and teaching. There was much to this School that I liked – small in number (191 boys, 9 Assistant Masters) which meant you knew about each one as an individual – and I liked the relaxed, friendly attitude to students. The School relied upon self-discipline and respect of students rather than imposing discipline and incredibly few abused this trust.

Mr Routh and the Senior Master, Ithel Thomas, had both been in World War I and the only lady member of staff, Miss Hood, whom I was to succeed, had been there from that war. Mr Farrington, the Deputy Headmaster, and several others had returned from World War II and there were two younger members of staff. The School in 1957 was mainly one class per year, though the lower school had two – the signs of the post war ‘baby boom’ and also the economic growth on Teesside.

The Waterhouse building had been added to in the mid 30s with the Coverdale Block and in the late 50s three further rooms were added to it. The old grass tennis court (the remains of which can be seen in the central quadrangle) was built on. The playing fields were extended and relevelled – the cricket square was moved from outside the old pavilion to the lower level, with a full sized football pitch on either side. On the upper level, there were 3 all weather tennis courts and a general practice area.

In 1961, Guisborough Grammar School celebrated 400 years of existence since Queen Elizabeth I granted Prior Robert Pursglove a charter to found a school and hospital. This event was marked each year by a Founder’s Day service in the Parish Church. Every year the School hymn “He Who Would Valiant Be” and the School Psalm – 121 “I will lift up mine eyes unto the hills” were sung followed by the list of all who had died in the 2 World Wars. This latter was sobering – given the number involved and the size of the School at the time. 1961 was marked by a Service of Commemoration on Founder’s Day in the Priory grounds, attended by the whole school, governors, parents, old boys and townspeople. That year, a variety of events were organised – a formal dinner, several musical events, dances, a stage version of “1066 and All that”, with the Summer Fete showcasing produce and activities by pupils, the old boys, and parents.

The proceeds from these events went towards the purchase of a former lead miner’s cottage in the hamlet of Blades, above Low Row in Swaledale – named after our Founder “Pursglove Cottage”.

It seemed a fair assumption that the boys Grammar School could look forward to its 500th anniversary but within 5 years the then government produced ideas for a comprehensive reorganisation of secondary education throughout the country, leaving local government to decide on how to do it. Within another 5 years, it was decided that Guisborough Grammar School for boys would metamorphose into Prior Pursglove College – a mixed college for boys and girls, drawing its students from Guisborough, Marske, Saltburn, Skelton, Brotton and Loftus.

Meanwhile, the continued growth of Teesside’s industry was reflected in the student numbers and staff size (by 1965 there were 359 boys and 21 teaching staff).

The changeover date was viewed with mixed feelings by both boys and masters as can be seen in copies of the School Magazine “The Guisborian” from the time. In the event, things seemed to go fairly smoothly; girls and lady members of staff arrived, uniform – the cap, blazer and tie worn by all lower and middle school boys – disappeared and students wore their own choice. Both sexes seemed to favour their own uniform – of denim!

The growth of 6th Form numbers resulted in a widening of subject choices. The timetabling became much more complex (a far cry from the early twentieth century timetable when all forms spent every morning on Divinity, followed by Latin and Maths, with afternoons given over to all other subjects!).

Administration changed – until 1960 Mr Routh, the Headmaster, taught each morning with his secretary arriving in the afternoons to assist with correspondence. (Staying with him in later retirement, I asked him how he coped with all the admin. “Oh quite easily, I binned anything duplicated. I opened and answered anything handwritten then the typewritten. I knew the local authority would write again if I’d binned anything of importance!”).

In the 1970s a new Admin block was added and office staff arrived. Soon after something unthinkable to Headmasters Berwick and Routh, who between 1905 and 1960 saw the importance of PE and games; - the playing fields were built on and later the gymnasium disappeared.

The advent of open access to the College and the disappearance of old catchment areas in favour of parental and student choice led to further growth in student numbers.

Looking back, I may have stayed at the same School or College for 35 years but after the first few years change has been continuous – from the (generally unhelpful) interference of politicians, new buildings and new curriculum to the altogether more agreeable interaction with staff and students – resulting in many lifelong friendships.