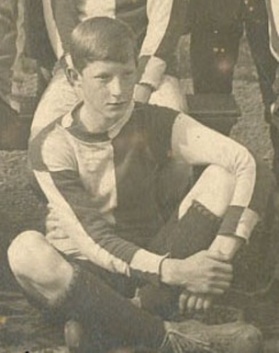 Edwin Pattinson was born on 15 December 1896 and joined the School on 9 March 1909. He was a keen footballer and was described as a good kick and tackler who was a great help to the team. He is pictured here in the School’s Football First XI in 1912, aged 15. Edwin was also a good, all-round cricketer, described as “especially useful in batting and fielding”.

He left School on 30 July 1912 and later served as a Lieutenant in 5th Battalion, King’s Own Yorkshire Light Infantry in World War I.

In April 1917, a major offensive commenced in Arras and Edwin Pattinson died during the fighting on 3 May 1917, aged 20.

Edwin is commemorated on The Arras Memorial which records the names of almost 35,000 servicemen who died in the Arras sector between Spring 1916 and August 1918 and have no known grave.