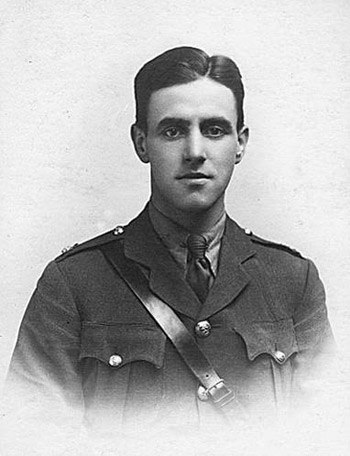 The son of a miner, Herbert Linford came to the Grammar School in 1908 aged 12, as a scholarship boy.

Herbert left school with his Junior Certificate in 1911 to become a clerk, first in a grocer’s office and then in the Government Valuation Office.

He served in the Great War in the Yorkshire Hussars, and later in the 10th Battallion Y & L Regiment. The picture on the left was taken early in the war.

Herbert was billeted on a farm in Sykehouse, Doncaster. There, he met his wife-to-be, Laura Bullas. They married and had a son called Alistair.

In the Second World War, Herbert Served as a Captain in the Home Guard.

He and Laura settled near Doncaster, where he worked for Pilkington's Glassworks.

Ever fond of sports in school, Herbert went on to be captain of the glassworks cricket team.  He died in 1967.

With thanks to Mrs A. Southward, granddaughter of Herbert Linford.