The Rev James Wilcock was Schoolmaster at Guisborough from 1811 until his death in 1843. He ran the school with mixed success, attracting both praise and criticism from his contemporaries.

He wrote one of the earliest surviving advertisements for the school: 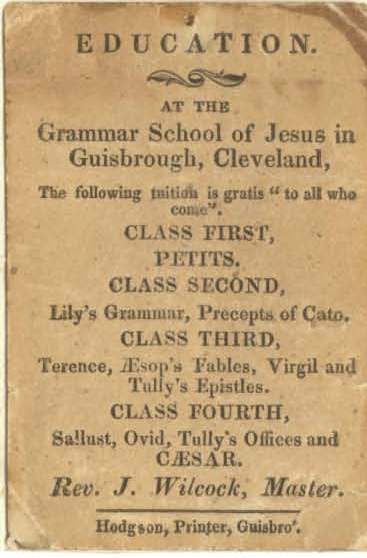 Looking at the advert, we can perhaps see where some of the criticism came from. Wilcock was not a modern teacher. His curriculum was grounded solidly in the specifications set out by Robert Pursglove in his statutes of 1561. While Pursglove had been progressive in the sixteenth century, by the nineteenth century his favoured methods were distinctly old fashioned. It is likely, however,  that Wilcock had little choice about what and how he taught, and indeed the school did not break away from Pursglove’s stipulations until several decades after his death.

In addition to his position of Schoolmaster in Guisborough, Wilcock had a curacy in Malton, where he and his wife Ann lived with their family. This seems to have upset the townsfolk, and it certainly upset the Wardens. In 1821, the Wardens threatened to reduce his salary if he did not come to live in Guisborough. He duly moved, and remained in Guisborough for the rest of his life.

His success as Schoolmaster seems to have been mixed. In the 1830s, A. B. Granville took a tour of the area, and he described the school at the time:

In a desolate-looking room, surrounded by empty forms and benches, designated as the Free Grammar School of Guisborough, founded in Elizabeth’s reign, there sat at the top table, opposite the seat of the reverend instructor, three little dirty and ragged urchins, with slate and pencil, and a Lily’s grammar… [A. B. Granville, Spas of England and Principal Sea-Bathing Places: The North (1840)]

It can’t have all been bad though. One of Wilcock’s students went on to become Victorian Cleveland’s foremost historian, John Walker Ord. Ord’s History and Antiquities of Cleveland is one of the nineteenth century’s most influential works on the area’s history,  and is still used today as a valuable record of the region.

While Granville was scathing, Ord takes altogether a different tone. Writing in response to Granville, and shortly after Wilcock’s death, Ord left this record:

With some defects, the late teacher, the Rev James Wilcock, was truly warm-hearted and benevolent, greatly beloved by his scholars, and ever anxious to advance their knowledge and interests. Fifteen years ago, when we ranked among his pupils, the school was exceedingly prosperous, but when Granville visited it, age began to press heavily on the aged minister, and the school declined with his declining years. [J. W. Ord, History of Cleveland (1846)]

Ord’s words are rather kind; a more tragic picture can be obtained by reading the hospital’s letters and minute book. Shortly before September 1841, James Wilcock suffered a paralytic stroke. We know this because his unmarried daughter, Ann (probably named after her mother), wrote to the Wardens to inform them. Ann took over the running of Guisborough Hospital in addition to looking after her father. After his stroke, he recovered enough to attend meetings, where he signed the minutes with a cross. 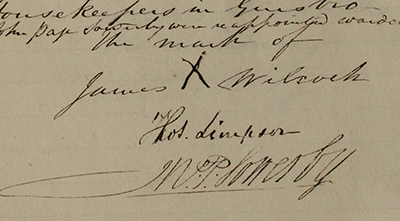 No doubt weakened by his stroke, Rev James Wilcock died in the summer of 1843.

The information on this page was taken from Dan O’Sullivan’s Robert Pursglove and his Hospital, in addition to material in the college archive.