The letters patent, or royal charter, of the Hospital of Jesus in Gisburn was granted on 25 June 1561. It is the document that allowed Robert Pursglove to found the free grammar school and almshouses, and gave him permission to write a set of rules by which that organisation was to be governed.

The charter is written in Latin, and is very faded in places, making it difficult to read. For more photographs, please visit this gallery.

This translation was made in the twentieth century. 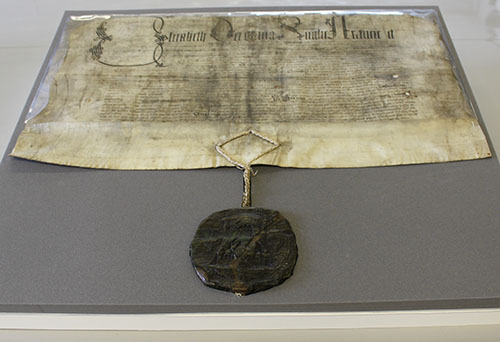 'Elizabeth by the Grace of God of England France and Ireland Queen Defender of the Faith &c. To all to whom the present Letters may come. Greeting.

'You are to know that We of Our special grace from Our certain knowledge and mere motion have granted and given licence and by these Presents do grant and give licence for Us our heirs & successors so far as in Us lies to Robert Pursglove Clerk that he or after his death his heirs executors or assigns or any one or more of them for the education and instruction of boys and youths as well as the support & clothing of the poor and needy shall be empowered to make found erect create & establish, to ensure for all future time, a certain Grammar School and Almshouse or Hospital in honour of Our Lord Jesus Christ Our Saviour in the town of Gisburne in Clevelande in Our County of York, of two wardens one Preceptor or School Master sufficiently learned & skilled in the grammatic art and certain other poor infirm and needy persons in terms of the ordinances statutes and foundation by the same Robert his heirs executors or assigns or any of them in this behalf to be made established and ordained concerning such Wardens Preceptor or School Master for the boys youths poor or needy persons for their institution instruction relief & sustenance.

'And that the said Robert his heirs executors & assigns and each of them from time to time shall be empowered to ordain grant & establish Ordinance Regulations & Statutes for the good and most salutary government of the said scholars youths and of the Wardens of the poor and infirm of the said House or Hospital or School as often as the need shall arise.

'And that the said two Wardens Preceptor or School Master and the aforesaid poor and needy there & their successors whomsoever when the same School or Almshouse or Hospital shall be so founded created erected & established shall be in fact & name one body corporate & one community in perpetuity & shall have perpetual succession forever.

'And that the said two Wardens Preceptor or School Master & poor people aforesaid by and under the name of the Wardens Preceptor or School Master and poor of the Almshouse or Hospital of Jesus of Gisburne shall be enabled to plead and be impleaded and also shall be enabled to sue to prosecute to plead and contest all & all manner of actions suits pleas debts demands & causes whatsoever both real and personal and mixed whatsoever shall be their origin or nature before all manner of Judges spiritual & temporal & other secular Justices & persons whomsoever and in the same to answer.

'Also the aforesaid two Wardens Preceptor or School Master of the said School and the poor of the Said Almshouse or Hospital of Jesus of Gisburne and their successors shall be persons fit and capable at law, in right and name of the said School and Almshouse or Hospital, for the gift donation devise release purchase receipt acquisition and acceptance of all manner of lands tenements rents reversion services tithes oblations advowsons of parish churches and rectories and the patronage of chapels with all liberties franchises privileges and other emoluments possessions hereditements chattels things moveable goods and legal rights whatsoever, whether by means of the aforementioned Robert his heirs executors and assigns or through other persons whomsoever of their pious liberality and bestowal in augmentation of the premises; and those things so given donated devised released purchased received acquired and accepted for the proper use of the same School or Almshouse or Hospital the Preceptor or School Master and the poor there and their successors to have convert use retain enjoy & possess forever, notwithstanding the statute against placing lands in a dead hand; so long as the aforesaid lands tenements and hereditaments do not exceed the clear annual value of sixty pounds above reprises nor are held immediately of Us Our heirs or successors in chief by knight service.

'And furthermore of our more ample and abundant special grace we have granted and given licence and by these Presents do grant and give licence for Us our heirs and successors so far as in Us lies to the aforementioned Robert so long as he may live and after his death to the heirs executors and assigns for this purpose specially assigned and deputed in his testament or last will and to each of them he and every of them shall be empowered and enabled, in and according to his or their beneficial discretion and conscience, to give found constitute  and establish statutes ordinances constitutions and provisions for the good regulation and government both of the said Almshouse Hospital or School as also of the Wardens Preceptor or School Master boys young men poor and needy folk and their successors, to endure for all future time, and the same if it seem fitting at opportune time and for reasonable cause to change correct emend and reform at their will and pleasure.

'Which several premises by Us as aforementioned granted may be executed in the future without the render payment or performance of any fine or fee great or little in the Hanaper of Our Chancery or elsewhere to the use of Us or Our Heirs for the premises.

'And without praying or suing out of Our Court of Chancery or otherwhence any writ or process in that behalf and without the taking and returning into Our Chancery of any inquisition thereon, notwithstanding in any wise any other statute act ordinance provision or restriction to the contrary thereof hitherto made ordained issued or provided nor any other thing cause or matter whatsoever.

'In testimony whereof We have caused these Our Letters to be made Patent.

'Witness Myself at Westminster the twenty fifth day of June in the third year of Our Reign.'